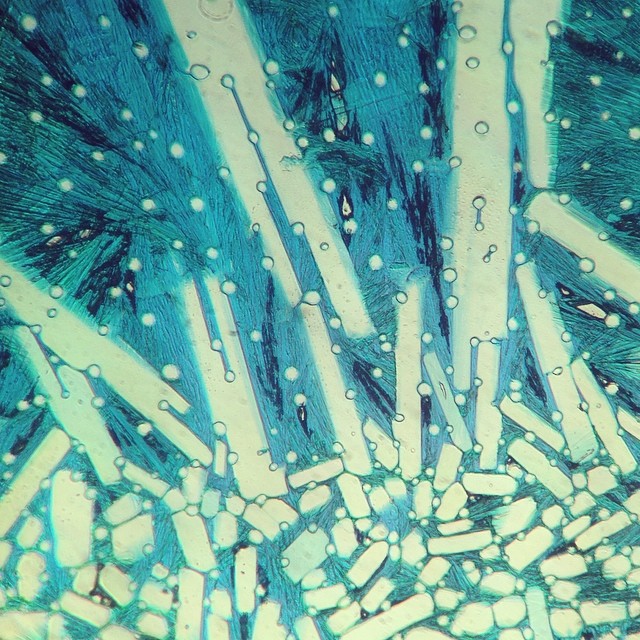 Recrystallization is a common process accompanying formation of the majority of igneous rocks. Evidences proving that a rock crystallized from true melt or hydrothermal fluid are usually ambiguous and perplexing. Most commonly these processes are overlapped in space and time causing even more confusion. Hydrothermal fluids tend to recrystallize rocks they derived from, changing its mineral composition and texture. However some alteration processes result in distinctly zoned patterns consisted of unaltered host rock (interior), a zone of complete recrystallization and intermediate zones. Analogue modeling approach was used to study process of crystallization from melt and subsequent recrystallization caused by emergence of solution. The experiment involves highly soluble and low melting point materials consisting of ammonium chloride, ammonium thiocyanate and ammonium thiocyanate cobaltate. The experiment resulted in textural metamorphoses (picture above) of the material resembling relations between granites and related to them zoned pegmatites.

Experimental
Oversaturated aqueous solution bearing  NH4+, Cl-, (SCN)-, and [Co(SCN)4]2-(?) ions  was prepared by mixing ammonium thiocyante (NH4SCN) and cobalt chloride hexahydrate (CoCl·6H2O) as described in (Means and Park, 1994). A drop of the solution was placed on a glass slide and heated up to 80°C. After dehydration the resulted solid residue was melted at 150°C. The slide with a drop of melt on it was covered with another slide. Subsequent rapid crystallization yields fine-grained aggregate consisting of crystals of ammonium chloride (NH4Cl), ammonium thiocyanate (NH4SCN) and ammonium tetrathiocyanate cobaltate (NH4)2[Co(SCN)4]·nH2O (Fig.1). Some amount water was introduced between the two slides after the melt had completely crystallized. Since the compound is highly soluble, dissolution happens instantaneously, however different kinds of crystals are dissolving at different rates. The sample was held at ~70°C for at least 15 hours. Dissolution is happening until the solution reached oversaturation point and crystals started to form. Besides numerous experiments conducted as described above some of the samples were deformed (via pressing the slide) to cause fracturing and thus, to produce more extensive recrystallization. All of the outcomes of the experiment were studied under a petrographic microscope.

Results
During rapid crystallization of the melt ammonium chloride crystallized first forming fine colorless cubic crystals. Ammonium thiocyanate forms after (or simultaneously) ammonium chloride had formed, demostrating colorless crystals with  acicularhabit, frequently skeletal aggregates. Ammonium tetrathiocyanate cobaltate forms fine blue crystals in the interstitial space between the solidified phases; individual grains are indistinguishable (Fig. 1, Video 1).
After introduction of water the compounds start to dissolve quickly but at different rates. Acicular crystals of ammonium thiocyanate disappear instantaneously, whereas ammonium chloride crystals remain undissolved.  Ammonium thiocyanate cobaltate remains in the solution for some time but also forms a narrow line at the front of crystallization (Fig. 2, Video 2).
Textural transformation occurred after a sample was heated up to ~70°C and remained at this temperature for 15h. It resulted in form of three distinct zones: the outermost zone with coarse-grained texture (front); the intermediate zone with “blocky” texture (the term was firstly applied by Means and Park, 1994); zone with the original “igneous” textures – the interior, that underwent slight changes (Fig. 3, bottom picture - quenched textures are still observed). All three zones are composed of the same three minerals which were described before. Frequently, the interior undergoes slight coarsening due to presence of moisture in the air and the neighboring zones (Fig. 3, top picture).

In deformed samples recrystallization involved bigger volume of the material compared to the experiments carried out without deformation. Recrystallization occurred not only at the front but also along microscopic fractures (Fig. 4a) and wide open cracks. "Mineralogical" composition of fracture filling material differs from place to place. The open wide cracks are filled with ammonium thiocyanade and ammonium thiocyanade cobaltate (Fig. 4b). The very fine fractures were healed with ammonium tetrathiocyanate with some voids remained unfilled. Submicroscopic fractures are healed by ammonium tetrathiocyanate cobaltate (Fig. 4c). 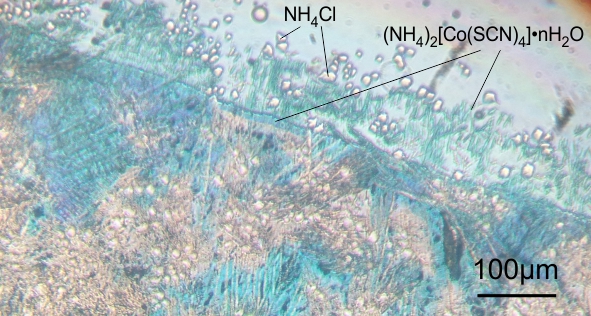 Discussion
Coarse crystals at the front appear to be formed from the least saturated solution
which was the very last portion of liquid present in the sample (Fig. 3). Sparse nucleation of slowly growing crystals happened on the outermost boundary of the intermediate zone. In the intermediate zone crystals precipitated from the most saturated solution existed in the sample. Nucleation occurred densely. Composition of the interior does not change, however the aggregate becomes slightly coarser grained retaining its main patterns (Fig. 4c). 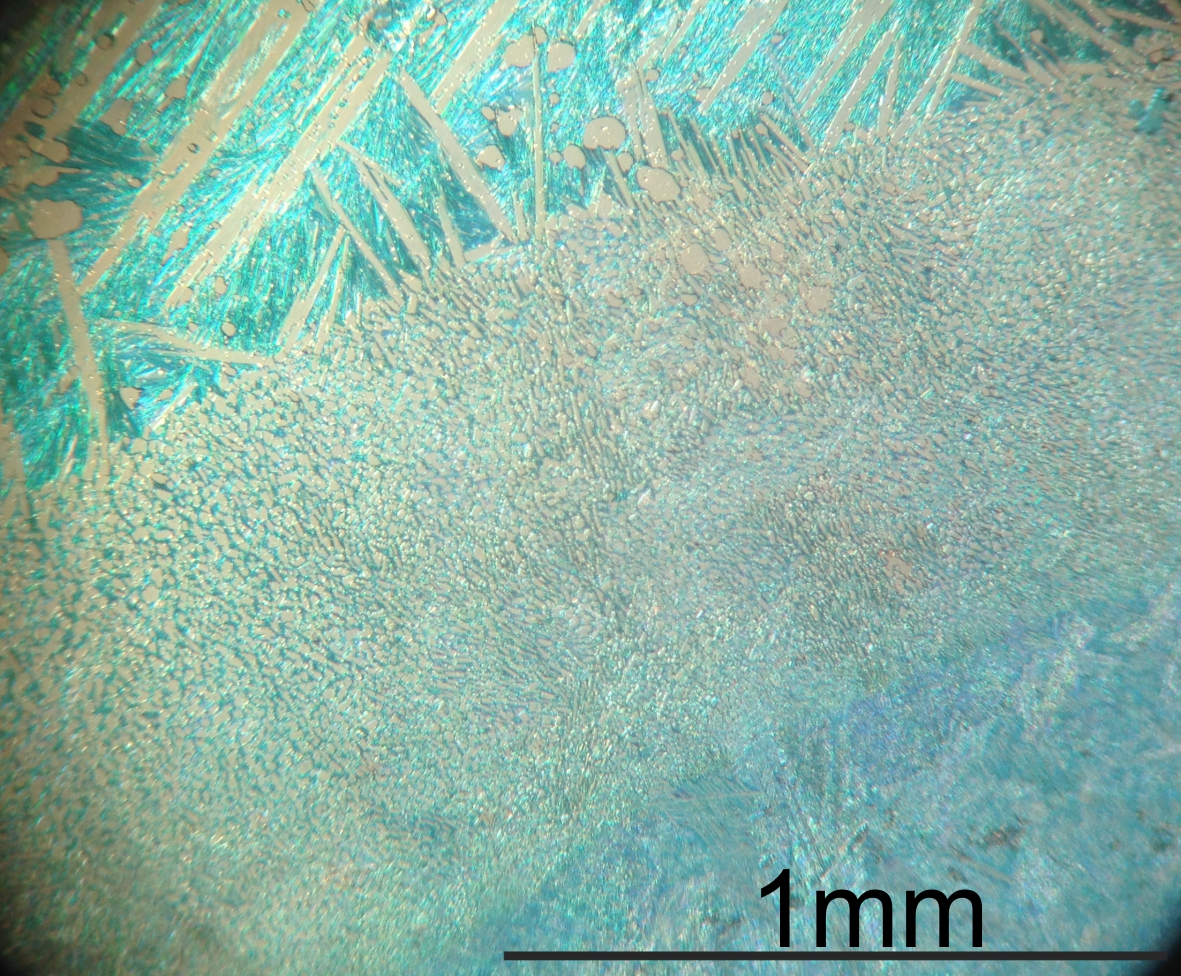 Read more »
Posted by David Zakharov at 5:47 AM No comments:

Email ThisBlogThis!Share to TwitterShare to FacebookShare to Pinterest
Labels: ICP-MS

It surprises me how highly refractive minerals with metallic luster like cuprite could transmit light so well.

Posted by David Zakharov at 7:56 AM No comments:

Certain types of rocks develop due to deformation and shearing that happen frequently along the fault zones. Extreme pressure and strain are responsible for recrystallization of rocks. Tiny grains of newly formed minerals develop along the boarders of the preexisting minerals. This texture called porphyroclastic.

The processes of shearing are very dynamic. The friction along the fault zones might cause significant rise of temperature. The rocks located in these zones experience brittle deformation, grinding and sometimes even melting, that occurs along the most intensive friction. Rapid solidification of the melt creates glass. The formed glassy rock is called psudotachylite, which was named after resembling tachylite (natural basic glass).

This rocks came from Australia. Courtesy of Dr. Alfredo Camacho.


Posted by David Zakharov at 9:00 PM No comments: