Another outcrop, another story

Northern New Mexico offers to see a beautiful story of volcanic eruptions associated with Rio Grande rifting that was active. The river of Rio Grande carved canyon in Taos plateau exposing extensive flows of 5 million year old basalts and minor andesites and dacites. Here's one particular outcrop that provides a snapshot of geological history of the region: 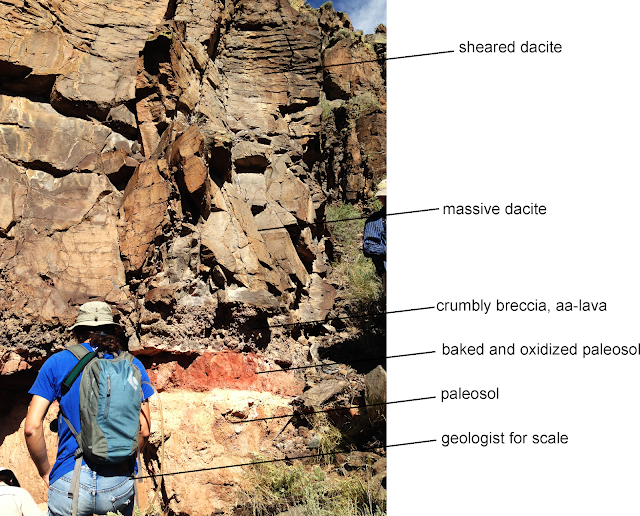 Paleosol (old soil) marks the period of surface erosion. Underlying rock is exposed to the atmosphere and is being broken down to produce soil. The paleosol contains remnants of root channels and other traces of  life on land. Based on the ages of underlying rocks the soil was developing about 5 million years ago.

Baked and oxidized paleosol was developed because hot lava was flowing on top of moist soil. At high temperature, available iron and water and oxygen was reacting resulting in oxidation of that iron.

Crumbly breccia, aa-lava newly erupted lava was flowing on top of the soil, cooling down quickly which resulted in partly solidified rock flowing in highly viscous lava. Solidification of the material produced crumbly, chunky aggregate commonly called 'a'a-lava. The rock was erupted about 4.8 million years ago.

Massive dacite is produced by massive outflow of dacitic lava that was hot enough to flow and cool down continuously.

Sheared dacite reflects interesting property of the silisic lava. Because of high SiO2 content dacite polymerizes more so than a mafic lava, resulting in its comparatively high viscosity. So when it cools down it viscosity is so high, that lava can't flow anymore, it starts to shear.

Geologist has something to learn about Taos plateau volcanic field. He was erupted about 25 years ago. 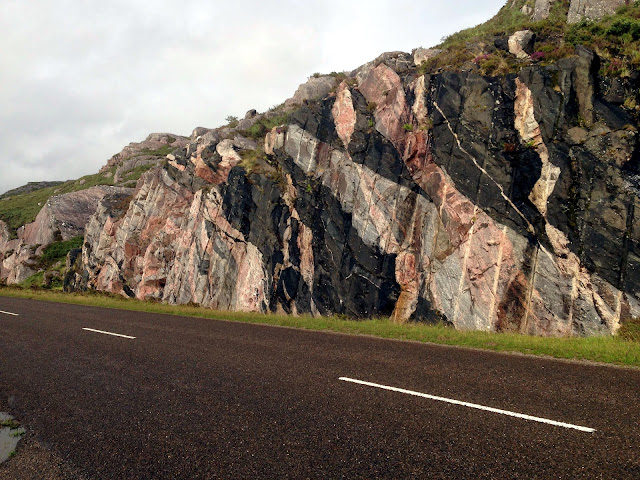 This outcrop is exposed along the roadcut of the A838 road in NW Scotland. It can be found at coordinates 58°23'24.43"N   5° 1'29.66"W. Google map streets view. Also called as multi-coloured rock stop, the outcrop became famous because it shows conspicuous cross-cutting relationship between the oldest rocks in Europe. The Precambrian rocks exposed here tells us a story: from oldest to youngest units can be distinguished by cross-cutting boundaries between them. The oldest rock in Scotland is Lewisian gneiss (grey). The original rock formed about 3 billion years ago and was metamorphosed multiple times (so now it's called gneiss). Then it was cut by mafic intrusions (black), or dykes (British spelling preserved), at about 2.5 billion years ago. Then all of these units were cut by granitic intrusions (pink), much later at about 1.8 billion years ago. After than, the whole assembly of rocks experienced metamorphism that shaped it's final look (sheared and stretched). Remember, the age of the Earth is 4.54 billion years, these rocks are really old!
Here's the outcrop with boundaries shown schematically. 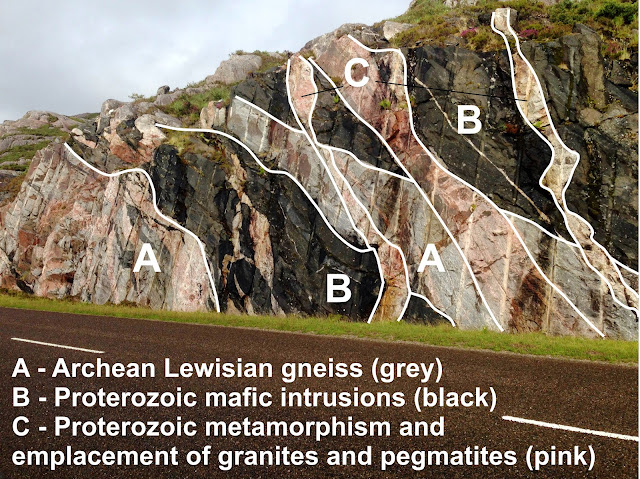