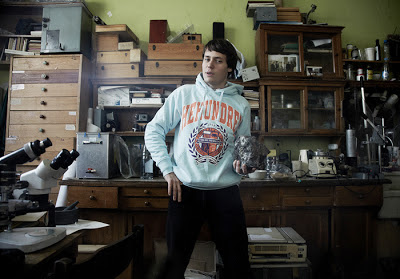 Recently, I have been interviewed as a young scientist for a Theory and Practice project, Moscow.

Follow the link for the ORIGINAL interview and pictures (Russian language).

The  translation (text only) is available below:

Email ThisBlogThis!Share to TwitterShare to FacebookShare to Pinterest
Labels: Interview

This is short report about field trip with Vernadsky Institute, RAS to proterozoic massif Gremyakha-Vyrmes.
The massif consist of three main complexes: 1) ultramafic-mafic rocks 2) foidolites 3) alkali granites and syenogranites [Polkanov et al., 1967]. Interpretation of sequence is complicated because of late tectonic and metamorphic processes that are occurred here intensive.
To view the location on the map click here. It is wonderful, you can see faults in granite complex form satellite.
Our object of study were alkaline rocks, particularly alkaline granites. Some authors do not recognize alkaline granite as the product of the same source as for ultramafic and basic alkaline complexes. They consider granites and layered ultramafic-alkaline pluton separately. It is difficult to belive because of emplacement and the similar age (?) of all rocks.
I will not publish our geological schemes because of their incompleteness.

Granites consist of two alkaline feldspars, quartz, aegirine, arfvedsonite, aenigmatite. They are distinguished from others similar granites by its age, setting and chemistry.
In some old ditches we found uranium-molybdenum occurrence with anomaly high radiation. There is a video demonstrating this.

I should say that vegetation covers all the territory and it took a lot for observing outcrops.

Read more »
Posted by David Zakharov at 1:46 AM No comments:


Short post about the thin section of biotite-kyanite carbonaceous schist from Keivy, Kola peninsula, Russia. The rock was invloved in processes of muscovitization, staurolitization, alteration, retrogressive metamorphism etc. I would like to show several pictures of Al2[SiO4]O modifications and high aluminous phases.

The pictures show complex and multi-step process of metamorphism of highly aluminous metasediments.

Posted by David Zakharov at 1:57 AM No comments: 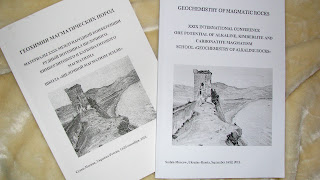 The conference was held in Sudak, Ukraine. This event is organized annually by laboratory of alkaline magmatism, Vernadsky Institute RAS.
The place was chosen very properly. The beauty of nature, historical places and The Black Sea helped to support positive atmosphere during the whole conference. 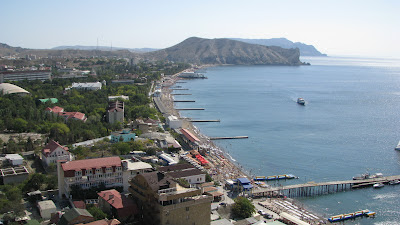 Theconference was opened with first words by L.N. Kogarko and E.M. Sheremet 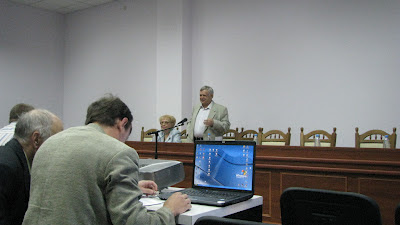 Read more »
Posted by David Zakharov at 4:00 AM No comments:

Proterozoic alkaline ultramafic massif Gremyakha-Vyrmes consists of
different rock complexes: 1) ultramafic-mafic rocks 2) foidolites 3) alkali granites and syenogranites [Polkanov et al., 1967]. Interpretation of sequence is complicated because of late tectonic and metamorphic processes that are occurred here intensive. Alkaline complex rocks and carbonatites replaced protolite whose interpretation is incomplete so far. In this case it is important to explore their mineral composition and sequence of crystallization of phases in appropriate degree. Particularly it is valuable due to rare-metal mineralization occurs in the complex [Sorokhtina et al, 2010]. The rare-metal metasomatic rocks occur as submeridionally orientated zones extending up to 6-8 km and have several hundred meters thickness. They exist in form of plate and lenticular bodies in varying degrees of altered ore (ilmenite) pyroxenites and foidolite, syenogranites.
Basically, alkaline metasomatic rocks are albitites, aegirinite. Their composition varies a lot depending on the protolith composition range. We believe that due to hard tectonics especially tectonic blocks shifting different complexes of  rocks were involved in metasomatic processes. The rocks that were altered are: 1. ore pyroxenites ultrabasite-mafic complex, 2. microcline syenites, alkali granites complex syenogranites 3. urtites, foyaites and nepheline-aegirine pegmatite foidolite complex.
Despite large range of minerals in rocks the main constituents are albite, aegirine, phlogopite-annite series, microcline, accessories are calcite, sulfides, graphite, pyrochlore group, zircon. Rarely in albitized microcline syenites quartz and fluorite could be found. Sometimes in the aegirine-albite metasomatic rocks arfvedsonite and biotite replace aegirine and titanite replaces ilmenite.
In thin sections calcite occurs as rare grains and aggregates, small veins. In this case we suppose that the protolith was a basic rock (Fig. 1a). Also there are nepheline relicts replaced by cancrinite, natrolite, prehnite and secondary mica aggregate.
Calcite carbonatites occur as concordant and semi-concordant viens in the metasomatic rocks. The veins are few tens of centimeters thick. Rock has a fine-grained and medium grained texture. Uneven distribution of carbonatite veins was discovered during the drilling. Under microscope carbonatites have a hypidiomorphic texture and contains 80-90%vol. of calcite (Fig. 1b). The texture of calcite aggregate is homoblastic. Signs of strain effects on the whole rock have not been identified. Apatite, aegirine, phlogopite-annite minerals, albite, microcline are also found here. Titanite, ilmenite, prehnite, graphite, pyrite, ferrialanite-(Ce), serpentine occur here in less quantity.
Calcite forms polyhedral well-shaped crystals, without traces of corrosion, the faces of adjacent grains are often found at an angle of 120 º. Twins are very common in the calcite and shown in form of flat parallel bands or rhomb system. Sometimes curved cleavage cracks and fine-grained aggregates of calcite are found here. Apparently this could be a result of later deformations. Graphite forms microspherulites aggregates in carbonate or tabular crystals in albitite matrix Mineral is also found as inclusions or intergrowth with pyrochlore, zircon, biotite. Aegirine occurs in single elongated prismatic crystals (1-2 mm on average) in calcite matrix; sometimes twins are shown here. Small cracks inside the crystals contain calcite, sulfides and fibrous silicate mineral which is less common. The common mica constituent is a phlogopite-annite series. Mineral forms a large (up to 1.8 mm) tabular crystals that are intergrown with albite and are often bent and has split edge areas that are replaced by chlorite group minerals. Albite and calcite occur along cleavage fractures in phlogopite. Albite forms large relic poikiloblasts  up to 3 mm, with a characteristic albite twinning. The twins are dislocated, separate blocks of crystals are shifted here. Aegirine, mica, calcite, sulfides, and graphite are found here as the inclusions in poikiloblast. Orthoclase usually forms xenomorphic relict grains. The size varies up to 1.5mm. Distribution of potash feldpar in calcite matrix is extremely uneven. The inclusions of calcite, albite, and zeolites are identified in relict crystals of potassium feldspar. Fluorapatite occurs in the calcite matrix in the form of a large (up to 1.5 mm) elongate-prismatic crystals with smooth outlines and strong fracturing, inclusion of calcite also develops in cracks. In thin sections fluorapatite crystals are oriented in one direction. Titanite forms large metacrystals several centimeters long as well as in albitites. Almost all minerals of carbonatite are established as inclusions in titanite crystals. Sulfides such as pyrrhotite and chalcopyrite form small flattened grains and aggregates which develop in the interstices of calcite.
Proceedings of the petrographic study of thin sections allow us to conclude that formed metasomatites were involved in carbonatization process intensively and microcline, aegirine, phlogopite-annite, ilmenite, titanite represent the relicts. Fluorapatite and graphite are syngenetic to calcite, other accesory minerals formed on final stages of crystallization.
Generally, alkaline metasomatic rocks could be classified as fenites-nepheline type of metasomatism [Zharikov et al, 1998]. The process described as apomagmatic without regard to the granite or gneisses and the composition of paragenetic association varies depending on what kind of the block was involved in metasomatism. The process appeared on the final stage of foidolite intrusion and was formed by residual alkaline-carbonate fluid. Rocks of foidolite group and associated with them syenogranites, hyperbasic rocks were involved in process of metasomatic alteration. That caused forming of different and complicated mineral associations and several generations of forming minerals such as microcline, albite, aegirine, micas.
REFERENCES
1.Zharikov V.А., Rusinov V.L., Marakushev А.А., Zaraisky G.P., Omelianenko B.I., Percev N.N., Rass I.T., Andreeva O.V., Abramov C.C., Podlesskii K.V. Metasomatism and metasomatic rocks / М.: Nauchnii mir, 1998. 492 p.
2.Polkanov A.A., Eliseev N.A., Eliseev N.E., Kavardin G.I. Massif Gremyakha-Virmes, Kola peninsula. М., Nauka, 1967. p.236.
3.Sorokhtina N.V., Kogarko L.N., Shpachenko A.K. New geochemical and mineralogical data about rare-element occurrence on Gremyakha-Virmes massif // Docladi RAN. 2010. Т. 434. № 2. p. 243–247.
Posted by David Zakharov at 12:12 AM 1 comment:

This post is about my short field trip to Mt Diablo that is located in Contra Costa Co., California , in San Francisco Bay Area (view on wikimapia). Mount Diablo is the part of The Diablo Range (Devil Range) which is a mountain range in the California Coast Ranges subdivision of the Pacific Coast Ranges.
The geology of this area is significant and a you can find a lot of information in the web.The simplified geological map of Mt Diablo State Park area is show on Fig. 1.
I was most interested in ophiolite part of structure and particularly in glaucophane schists that could be observed here.
Ophiolite complex includes deep water sediments, pillow lavas, parallel diabase dikes layer, gabbros and serpentinized peridotite blocks.

Franciscan complex actually is a tectonic melange and consist of may different rock types such as mafic rocks and deep-sea radiolarian cherts (ophiolite formation), greywacke sandstones, limestones, shales, and high-pressure metamorphic rocks, all of them faulted and mixed in a seemingly chaotic manner.

The most abundant rocks here were gabrro and diabase, rarely pillow lavas. Evidently it was part of ophiolite formation.
Read more »
Posted by David Zakharov at 8:34 AM No comments: