Introduction
Geochemistry, a branch of geological sciences, started its existence with contributions of Frank Clarke, Victor Goldschmidt and Vladimir Vernadsky. The initial concern of geochemistry was to characterize the chemical composition of the planet. Nowadays papers by Condie (1993), McDonough and Sun (1995), Taylor and McLennan (1985), Ronov and Yaroshevsky (1969), Rudnick and Fountain (1995), Turekian and Wedepohl (1961), Vinogradov (1962) and others are probably the most relevant references in the field. However, early influential contributions regarding the Earth’s composition were papers by Clarke and Washington (1924), and Goldsmith (1933). Their studies were focused the average composition of the most accessible part of the planet – continental crust and its components (e.g., igneous rocks merely). While, the paper by Clark and Washington (1924) is easily accessible on the internet, well-cited Goldsmith’s “Grundlagen der quantitativen Geochemie” (1933) was accessible for me only via library order. The actual reference is: Goldschmidt, V.M. (1933). Grundlagen der quantitativen Geochemie. Fortschrift Mineralogie 17(2), 112-156. Of course, it comes in German. I wondered how often such an influential paper was actually read (although I am aware of later Goldschmidt’s papers and a book in English, they are rarely cited in the context).

A good friend of mine, Sara Yanny-Tillar, recently received her Master’s degree in Germanic languages from the University of Illinois, Urbana-Champaign. Her interest in German language is admirable and she was very kind to help me with translating a part of the paper. The translation turned out to be great and Sara said it was good experience for her to translate something scientific. Thank you, Sara!

Translating the chapter “Durchschnittliche Zusammensetzung der Eruptivgesteine” (Average Composition of Igneous Rocks) is especially important as Goldschmidt used the new approach to estimate the average composition of igneous rocks and continental crust overall. Arguing that the method used in Clarke and Washington misinterpreted the proportions of rock composing the average continental crust, Goldschmidt used fine-grained sedimentary rocks such as post-glacial tillites and shales as they naturally preserve proportions of rocks composing the crust. 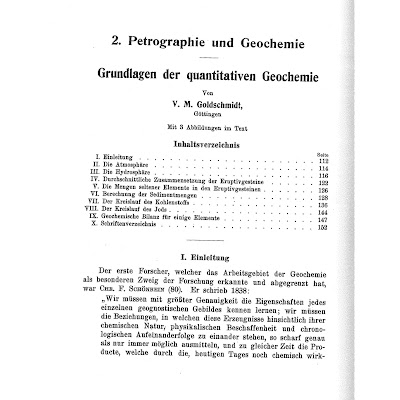 Read more »
Posted by David Zakharov at 8:02 AM No comments: