Uncommon appearance of common minerals or I wish Mn would be more abundand element. 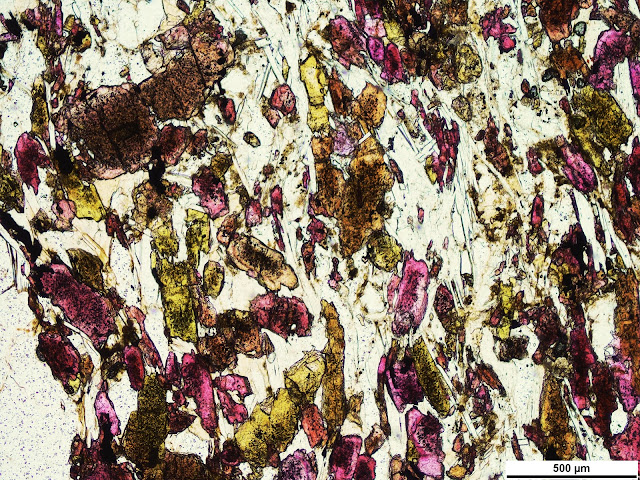 These Mn-rich metamorphic rocks were found in Australia by Dr. Alfredo Camacho, who kindy let me take and post the pictures.
More pictures:

Read more »
Posted by David Zakharov at 4:43 PM No comments:

Today I had a chance to work on a Raman spectrometer. A hooked-up microscope allows to make measurements in situ. Surprisingly, thin sections with cover glass are also applicable! 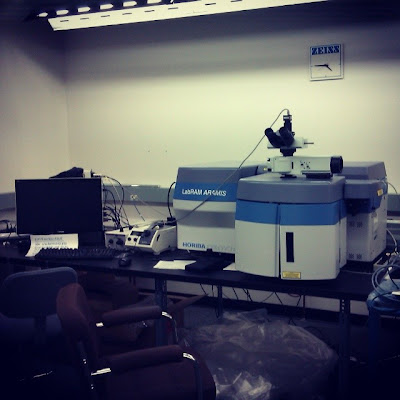 So, let's take a suspicious zircon-looking grain. Its irregular shape and thus, unavailability to determine extinction cast doubts on the identification verdict. After ~50 seconds, the spectrometer gives a beautiful spectra. However, it is not enough to identify a mineral (in my case). The link provides us with 100% zircon and its Raman spectra which is almost identical. Ta-da. 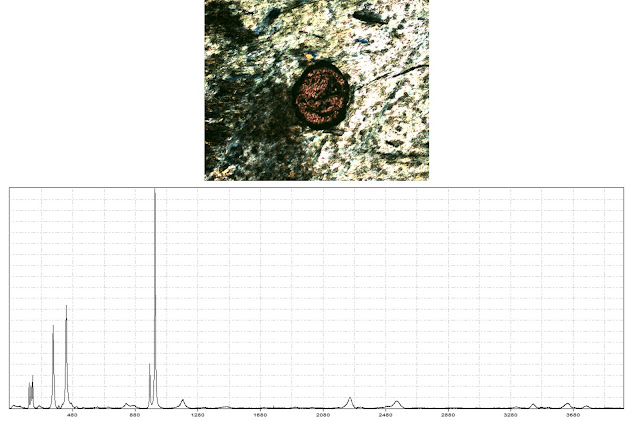 Posted by David Zakharov at 9:36 PM No comments:

Email ThisBlogThis!Share to TwitterShare to FacebookShare to Pinterest
Labels: Raman 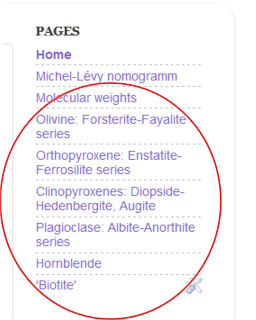 Currently, I do not have much free time to update my blog on a regular basis, so, I decided to make it more education-orientated. Since I travel a lot, I don't have much space for all the books I need. So, it is nice to have all the data I use online. Unfortunately, not everything is easy to find on the internet (e.g. extinction angle in 'symmetric zone' vs composition of plagioclase). Now, I have posted some basic data on rock forming minerals (2V, refractive indices, thin section photos, etc) and more data will be available soon!
I truly believe that it might be useful not only for myself but for all the geology/petrology students around the globe. 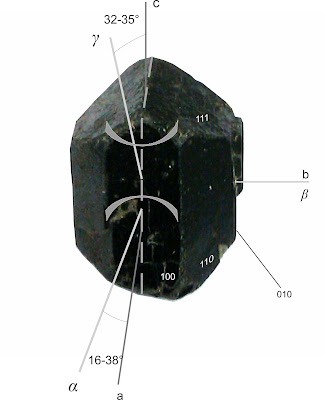 All the pictures, tables, pictures are reproduced or created by me, if it is not specified otherwise. Most of the data was taken form Deer, Howie and Zussman "Rock forming minerals" (1966), Tröger's "Optische Bestimmung for Gesteinsbildenden Minerale" (1971).
I also want to ask if there are nice people who might want to contribute some of the thin section pictures.  Please, contact me if you have any microphotos of rocks/minerals. Your cooperation will be much appreciated and your name will appear here!

Posted by David Zakharov at 11:44 PM No comments:

Email ThisBlogThis!Share to TwitterShare to FacebookShare to Pinterest
Labels: update

This summer I had a great opportunity to work for the Geology Department, University of Illinois, Urbana-Champaign. In the department we have studied samples of rocks from recent eruption of Oldoinyo Lengai volcano. Despite the research being focused on the study of isotopes using ICP-MS techniques to the young volcanic rocks from, some petrographic studies were also done. It is worth noting that Oldoinyo Lengai is the only one known volcano that erupts natrocarbonate lava (natrocarbonatite). It is located in the East African Rift, the active rifting system. Nowadays it erupts mostly nephelinitic material, however it has been found that type of eruptions changes regularly from silicate to carbonaceous.
Almost all the samples we have are loose aggregates of rounded lapilli 2-5 mm in diameter . The carbonatite tephra is very loose and it is extremely hard to prepare these samples for petrographic study. Each of the lapilli contains one or several phenocryst surrounded by fine-grained groundmass. The most common mineral that forms the phenocrysts is nepheline. The phenocrysts of wollastonite are less abundant. Rarely, phenocrysts of clinopyroxene and garnet could be found. Mostly, all the phenocrysts surrounded by some amount of fine-, medium-grained dark groundmass (Fig. 1). 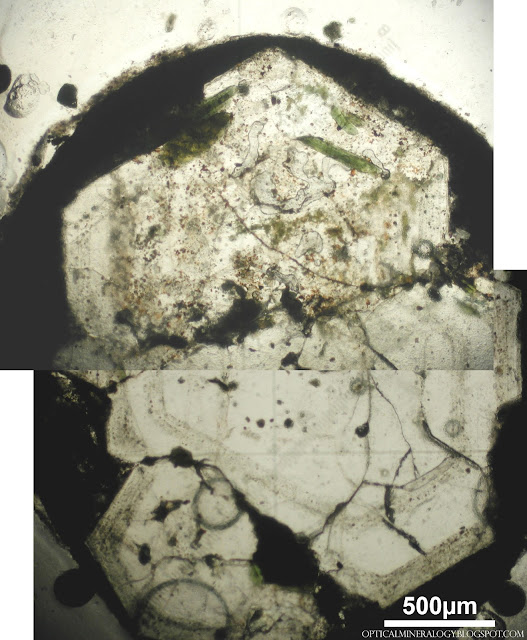 Phenocrysts of nephiline form short hexagonal prisms. On Figure 2 section plane is parallel to c axis of the crystal (as well as to its optical axial plane) and perpendicular to it on Figure 1. This orientation is also confirmed by emplacement of the inclusions. They are parallel to both (0001) and sides of prisms.
Large crystals of nepheline have large amount of inclusions that arrange according to the zonality. The arrangement Aegerine-augite is the most abundant mineral among the inclusions. Fe-oxides and hydroxides, garnet grains, volcanic glass (melt inclusions) are also common as inclusions.
Groundmass is very dark in color. Mainly, it is made up of nepheline, aegirine-augite, wollastonite, apatite and opaque minerals (magnetite and/or perovskite) and volcanic glass (?) (Fig. 3).
Some phenocrysts are free of any kind of matrix and could be found in the volcanic tephra (Fig. 4).

Some alkaline minerals play an important role in our everyday life. Considering my kitchen as an alkaline province I decided to look closer at one the main constituent. Baking powder is made up of sodium hydrocarbonate (NaHCO3) and its natural analogue is nahcolite. Since the powder I used is a loos aggregate of short-columnar crystals the microscope is not very useful. Thus the sample has been dissolved in water and then dried down in microwave. Due to short crystallization time nahcolite formed spherulites which demonstrate typical cross-like extinction in cross polarized light. 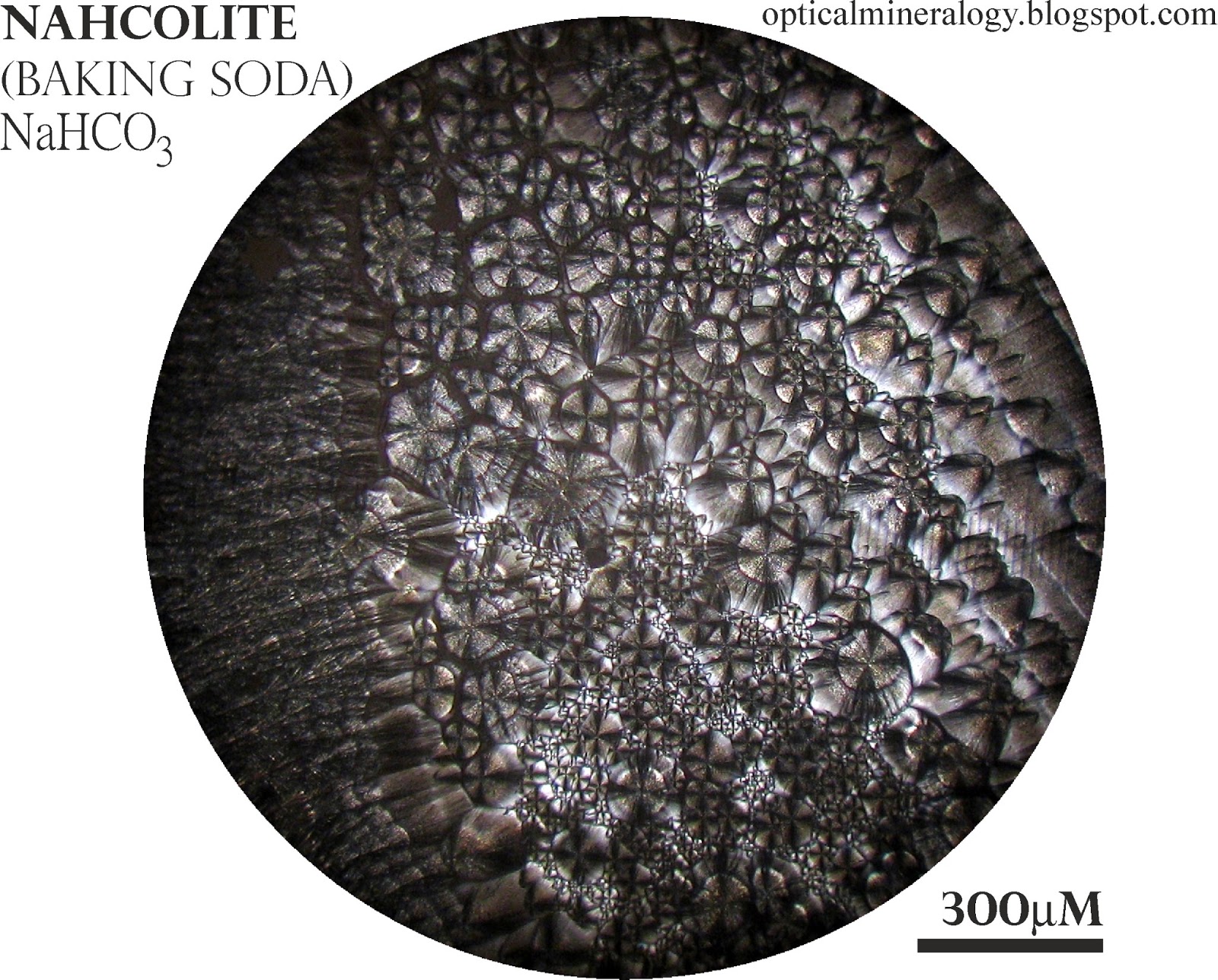 Obsession - s/t 2013. Everything gets involved.

First of all, I am sorry to post this so late. The album came out 4 month ago.
I am happy to show the world the interaction of Music and Geosciences. The Obsession's new album came out in March, 2013. I am proud to see my picture on the cover of album. I am grateful to my best friends/bandmates for their support,  for playing the music and being with me.
Listen and download (free) music: http://obsessionhc.bandcamp.com 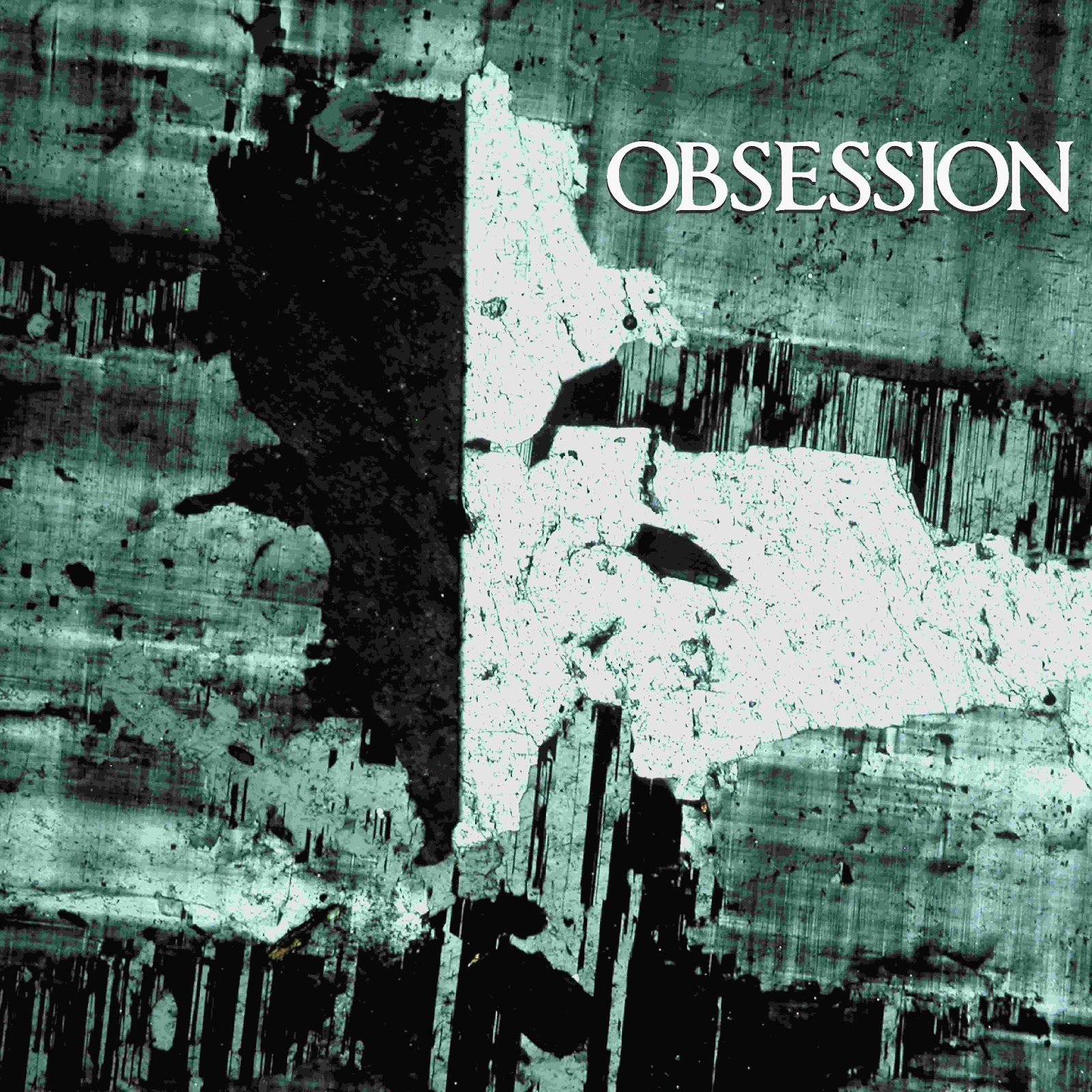 I would like to give a short explanation. Basically, this pegmatitic rock (microclinite) consists mostly of large (>10cm) microcline-perthite crystals. Rarely, anhedral grains of albite (not perthite) could be found embedded in microcline. On the picture you see: gray irregularly colored mass - microcline; two striped bends across the picture - perthites; black-white crystal in center - albite.

The most interesting fact is that central albite grain is, most likely, relict from alkali granite that existed here before the rock turned into microclinite. Since the relict grain is more calcic, it shows higher relief than perthite bends. More "scientific" look: 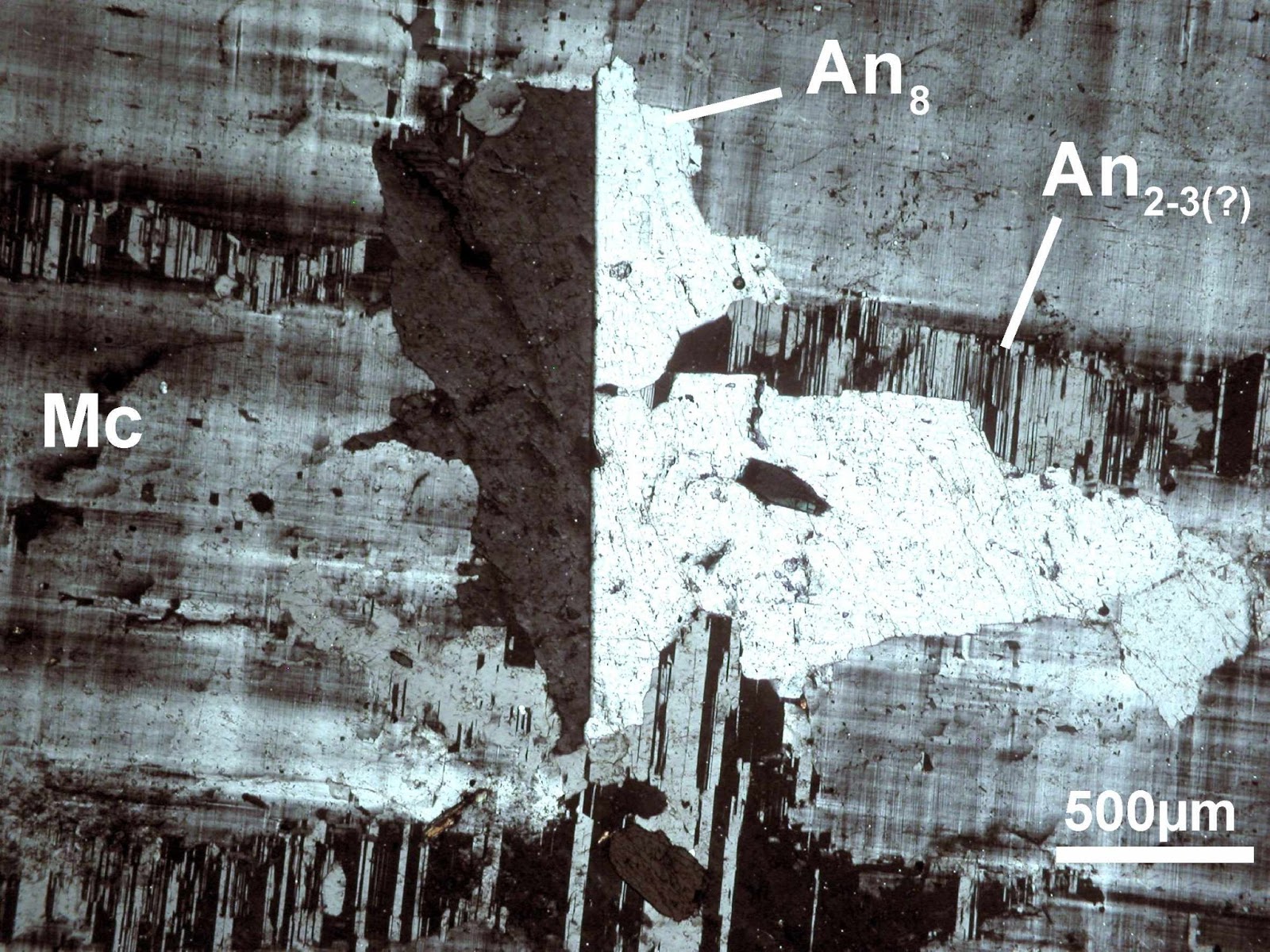 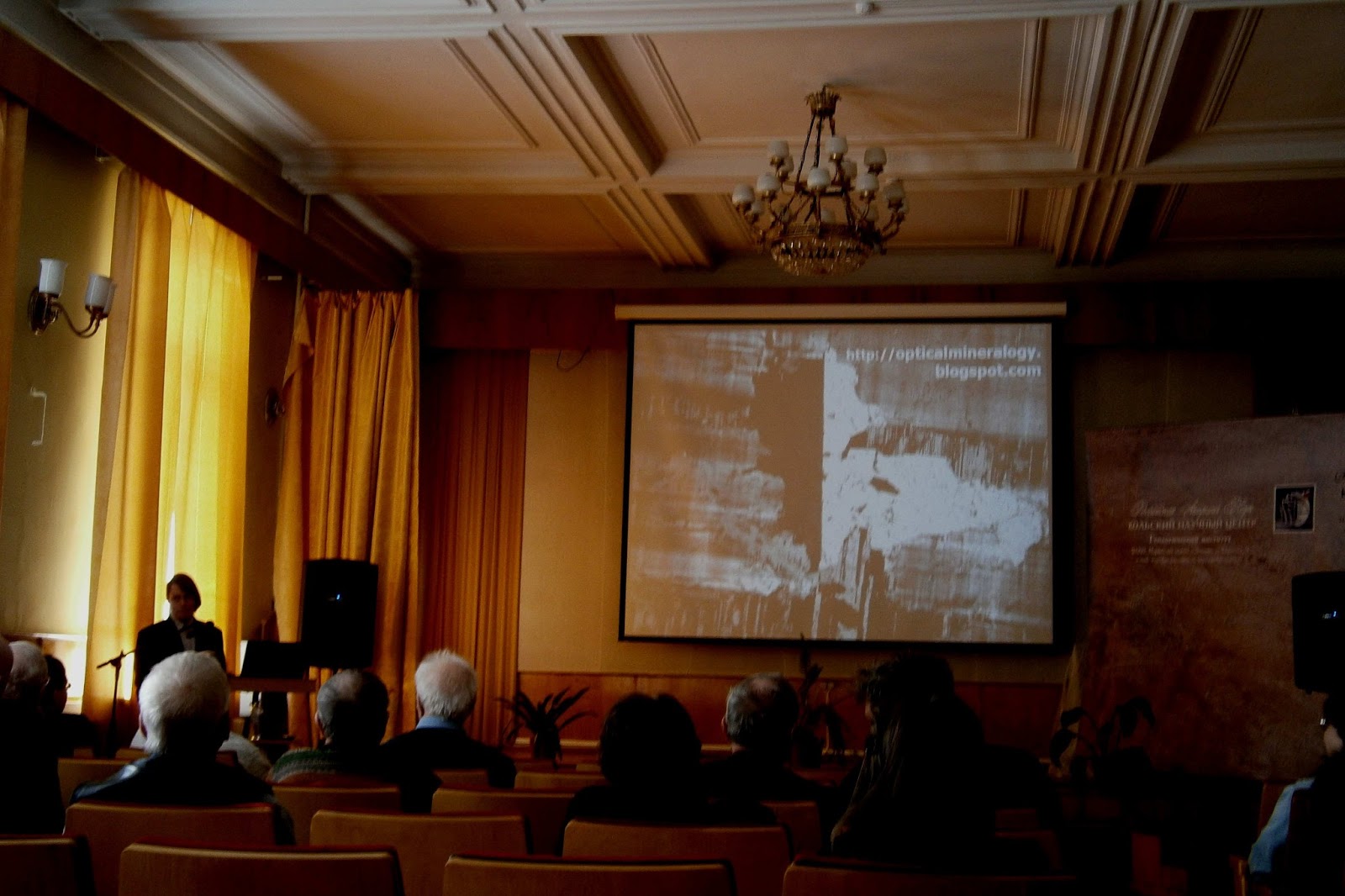 
Posted by David Zakharov at 9:13 PM No comments: 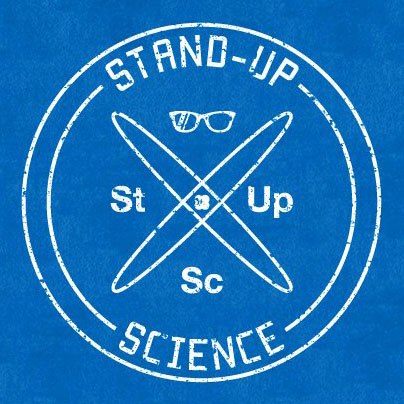 It was a great experience to participate Stand-Up Science Battle last week! I was waiting for this type of event for so long. Science have to be popular and interesting!
So you can present whatever you want about science but there are several rules:

1. You have only 3 minutes to talk about your breathtaking activity.
2. Keep your speech free of too much scientific words that are not so popular among non-interested people.

This is event appeared tough one for me. 3 minutes is incredibly short period. Explaining every word is unacceptable in this case. So the end of my presentation was clipped.
I was talking about studying of magmatic rocks. From the very beginning - crystals, mineral grains; to large magmatic provinces. I have tried to show that studying texture, structure and minerals could give us enough information to suppose geological setting and conditions of crystallization. 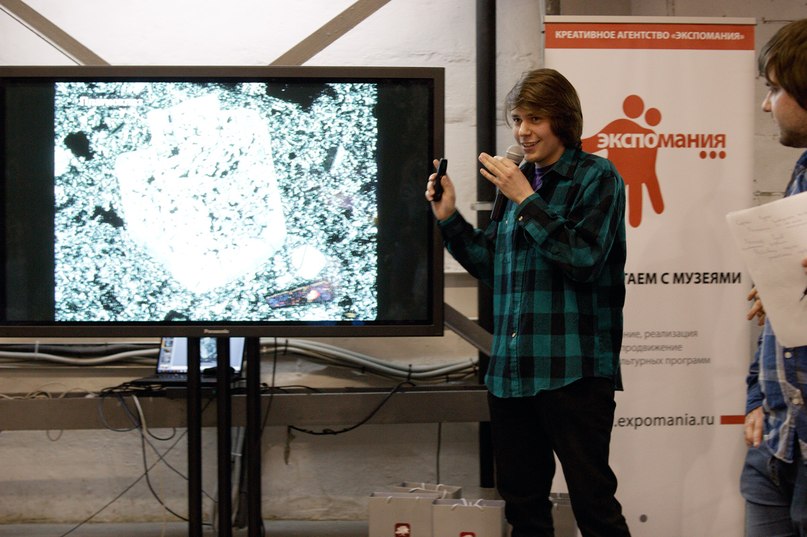 You are looking at the texture (the large crystal and fine-grained ground mass) you already know that this is volcanic rock. The rock formed from lava erupted on the day surface. Plagioclase phenocryst, Shipunskiy cape, Kamchatka.
Read more »
Posted by David Zakharov at 1:26 AM No comments:

X Fersman Scientific Session was held in Kola Science Center, Russian Academy of Science, which is located in Apatity, Murmansk Oblast. The conference was dedicated to 150th anniversary of the world famous scientist V.I. Vernadsky. Also, the event included celebration of Geologists Day (first Sunday of April) on lake Imandra (picture above). Two of us were sent for the presentation - me and Maria Akimenko, PhD student from Vernadsky Institute. I am thankful to everyone in Kola Science Center, Russian Academy of Science for a warm welcome and organization of the conference. The Session included oral reports from scientist all around Russia and several international representatives. We have met members of Geological Survey of Finland - General Professor, Elias Ekdahl, and professor from University of Delhi, India - Dr. Ashima Saikia. The abstracts will be published in special peer-reviewed collecting book. Every abstract could be 4 pages maximum. 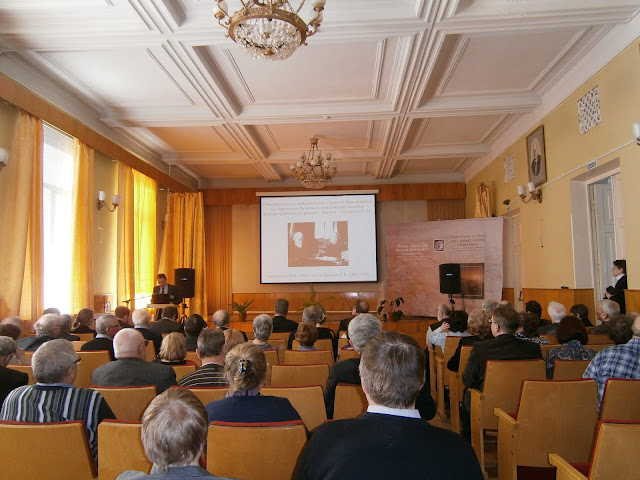 Read more »
Posted by David Zakharov at 3:31 AM No comments:

The Award of Federal Agenсy for Subsoil Use and Russian Geological Society, April 2013.

It was a great pleasure to be awarded by the Federal Agency for Subsoil Use and the Russian Geological Society for my work in 2012 year. I am very thankful to the people working in  this organizations. Also, I thank our research group at the Vernadsky Institute and the Geological Institute, Kola Science Center.

Nomination: "The best student paper in the field of fundamental and applied problems of geology contributory to the development of mineral resources"
Paper: "Genetic characteristics and metallogenic specialization of peralkaline granites of the Proterozoic polyphase complex Gremyakha-Vyrmes ".

Posted by David Zakharov at 2:45 AM 2 comments:

The article came out in December, 2012 in the journal called "Prospect and Projection of Mineral Resources". The journal was founded in 1931 and now it has impact factor 0.202 (2010). It was a great experience to study such an ancient and interesting rocks as a precambrian (proterozoic) conglomerates, which underlay the Banded Iron Formation of Kursk Magnetic Anomaly (KMA). 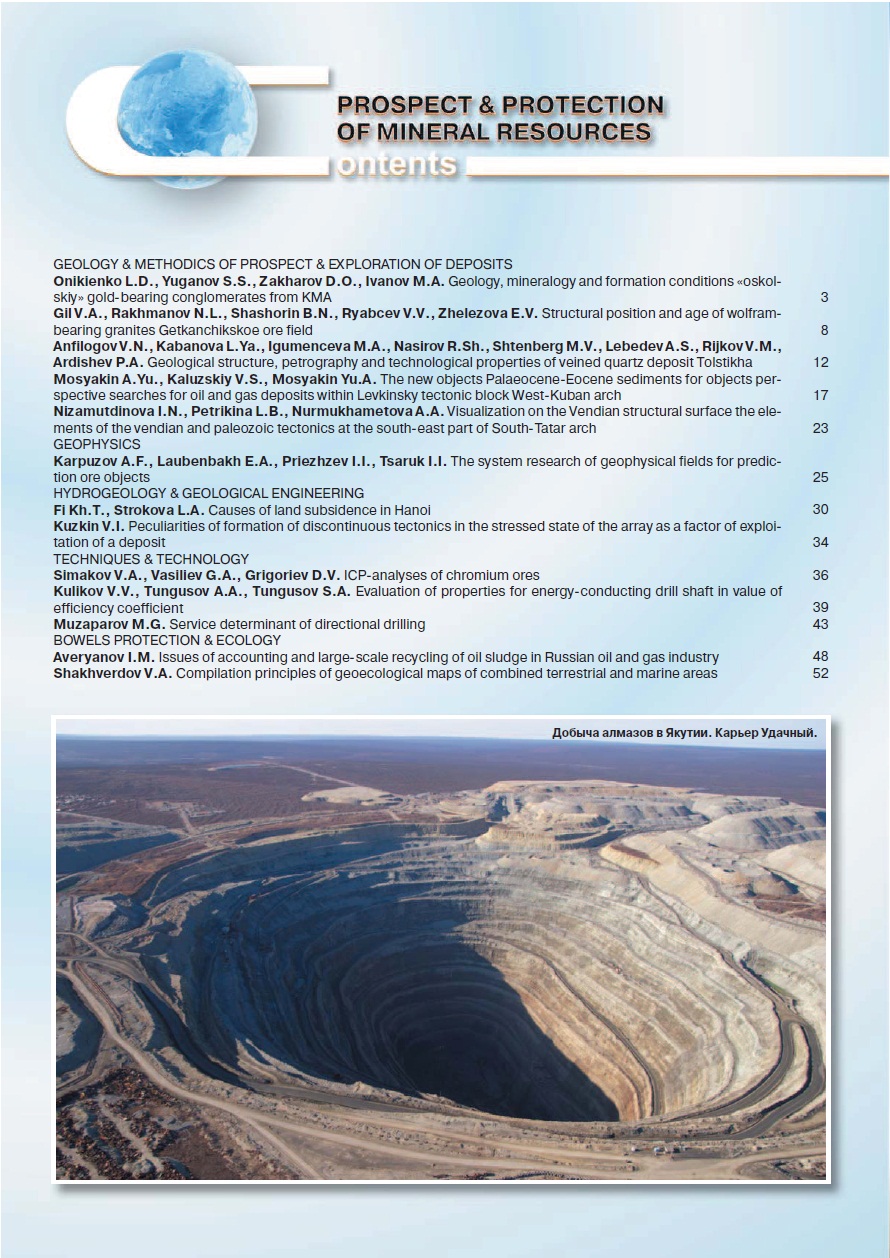 Geology, mineralogy and formation conditions «oskolskiy» gold-bearing conglomerates from KMA
Onikienko L.D., Yuganov S.S., Zakharov D.O., Ivanov M.A. (MGRI-RSGPU)
In this article the characteristics of geological position and gold-uranium-bearing Precambrian conglomerates and gravelites Starooskol’sky area are shown. The results of the mineralogical and petrographic studies of the clastic rocks confirm the involvement of  explosive volcanic activity during the Late Archean-Early Proterozoic time. The pebbles of «blue» quartz are considered to be amygdales that have been taken from underlying volcanic rocks. Gas-hydrothermal systems were involved in ore-forming mineralization. 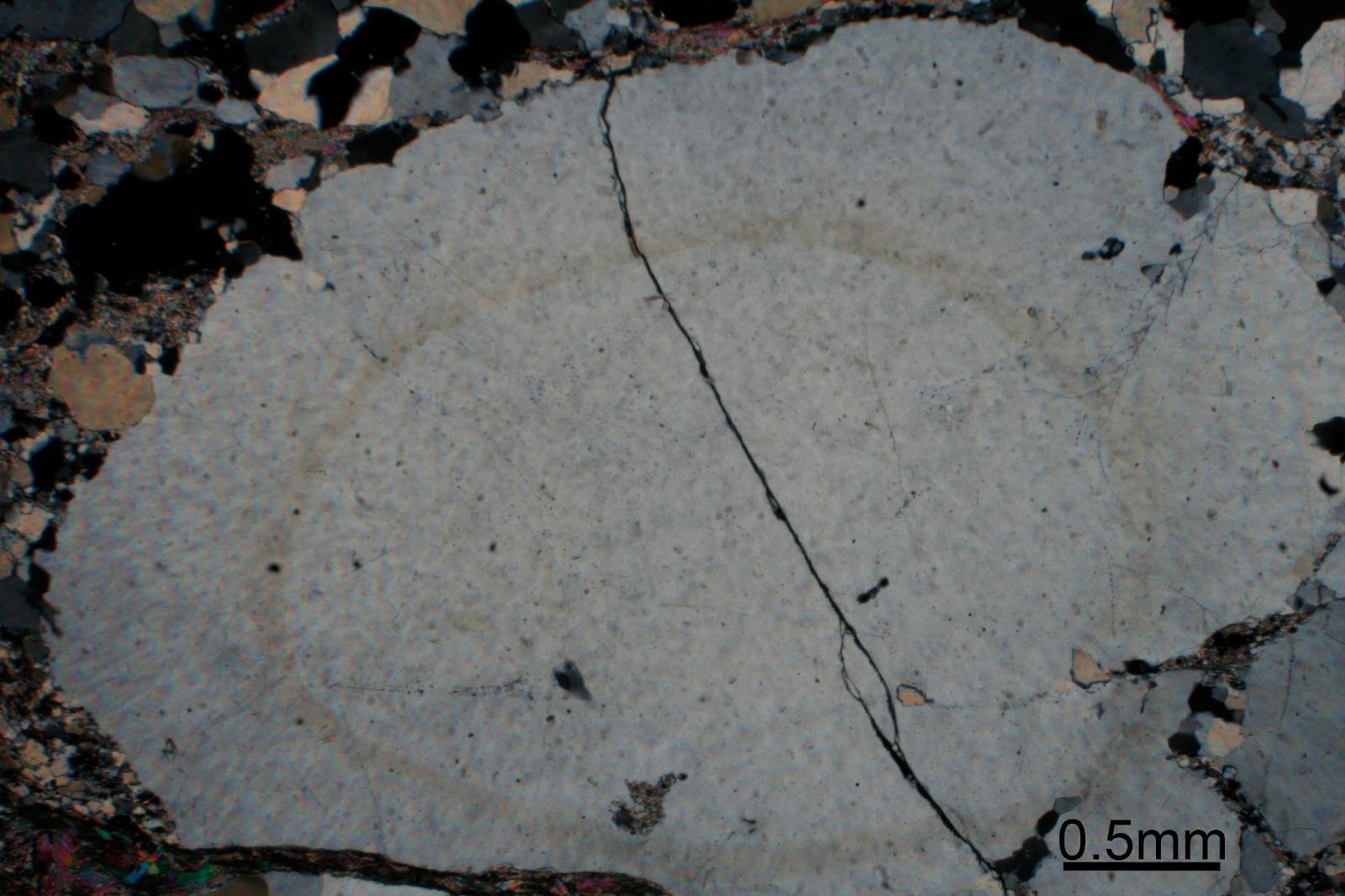 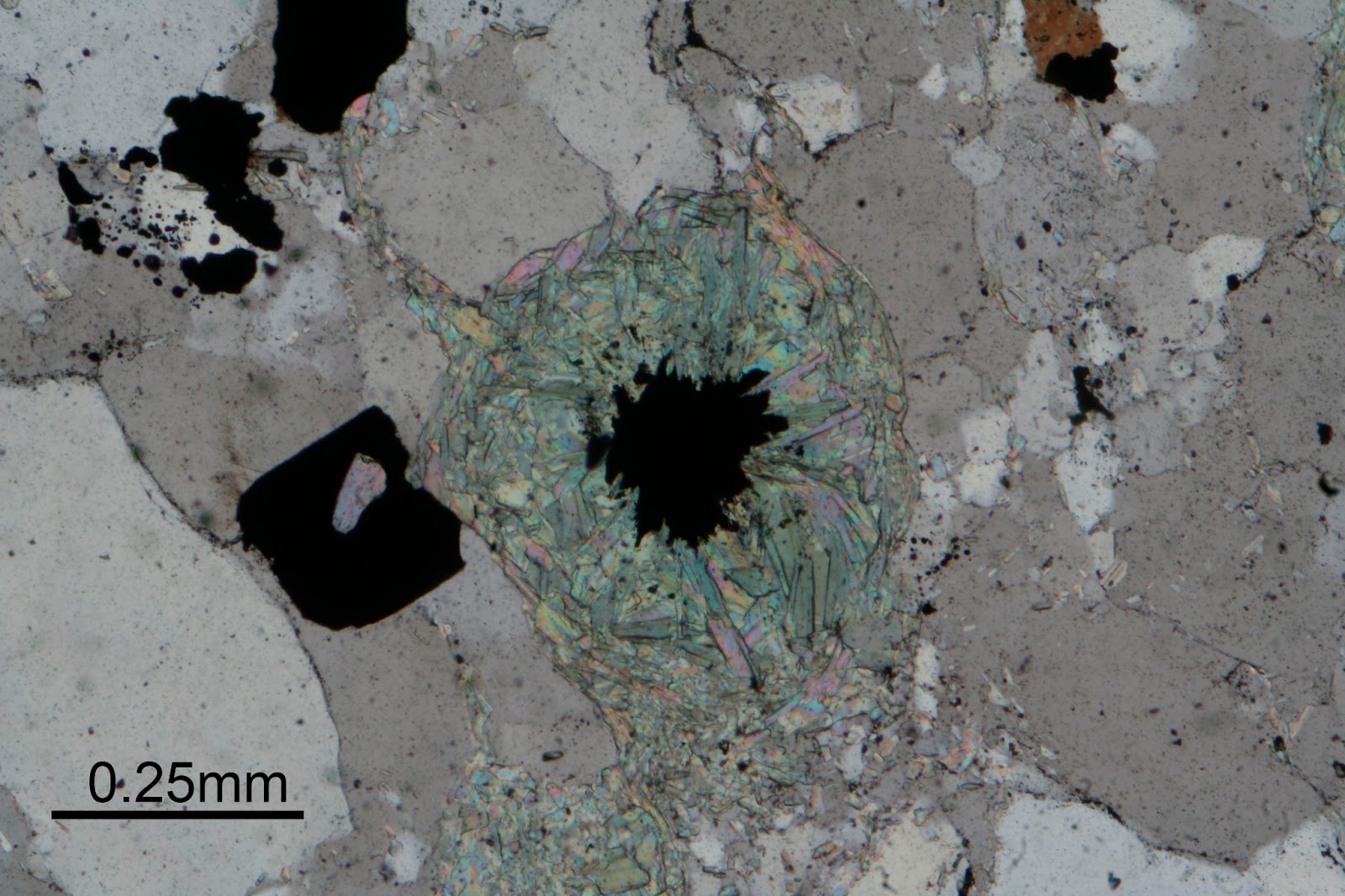 The green mineral from mica group. The replacement of opaque mineral. PPL


Posted by David Zakharov at 1:35 PM No comments:

Email ThisBlogThis!Share to TwitterShare to FacebookShare to Pinterest
Labels: Publication

recent update: It is big pleasure to find out that this post (russian version) took first place in user ratings. I thank my friends for their help and attention.

Unfortunately, I do not have time to update my blog very frequently but finally, I am finishing this post in a week before St. Valentine's Day. This is my pleasure to share things I find incredibly wonderful and beautiful. The post focuses on the interesting and unusual textures and minerals observed in the rare-metal Li-F-rich granites.
During the last semester I had an opportunity to study thin-section samples of Li-F granites, Etyka massif located in the Eastern Transbaikalia (Fig. 1). Granites form a small intrusive body of Jurassic age which is a part of Hangilayskiy ore cluster. There are several W, Sn, Be, Ta deposits related to plutons of peraluminous (Al/(2Ca+Na+K)>1), subalkali ((Na2O+K2O)>8 wt. %) granites (Syritso et al., 2011, Zaraisky et al., 1997). Due to relatively low melt viscosity, saturation with the volatile elements (F, H2O) and enrichment in some rare elements (Li, Be, Rb, Ta, W, Nb) (Fedkin, 2000) the mineral composition and textural features of Li-F granites are particularly interesting for study. 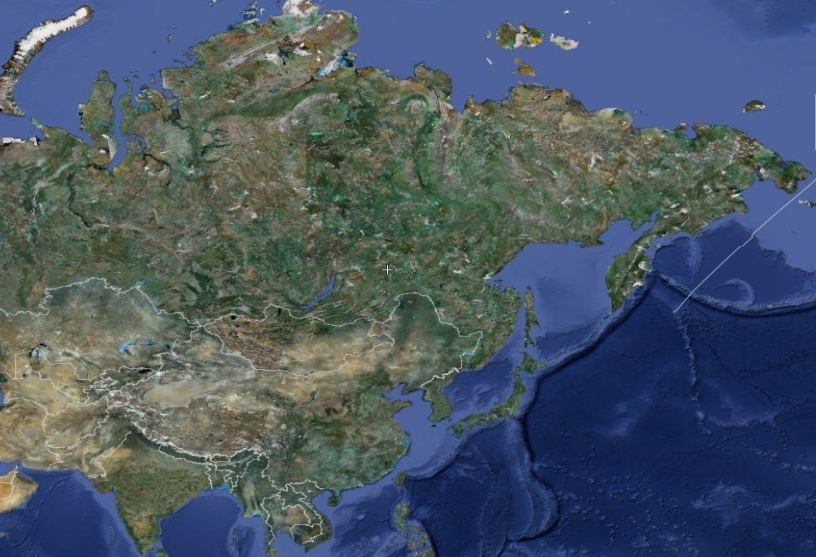 Figure 1. The location of the Etyka granite massif, Eastern Transbaikalia.

The most part of the pluton is composed of coarse-grained microcline-albite granites (Fedkin, 2000), where microcline often has light green color (amazonite) due to the impurities of lead, divalent iron and some other elements (Seltmann et al., 1999). These granites are characterized by the presence of mica siderophyllite-polythionite and polylithionite-trilithionite series - zinnwaldite, lepidolite (vol. 10% ). Topaz is relatively common here and occurs in the amount of 5-10 vol. % , the fluorite is less abundant (vol. 1% ).
A well-known feature of the Etyka granites is a poikilitic texture formed by rounded quartz grains (2-3 mm in size) containing numerous inclusions of predominantly albite. Frequently albite is oriented concentrically inside the quartz grains. Such forms is often referred to the "snowball" textures (Fig. 2a, b). 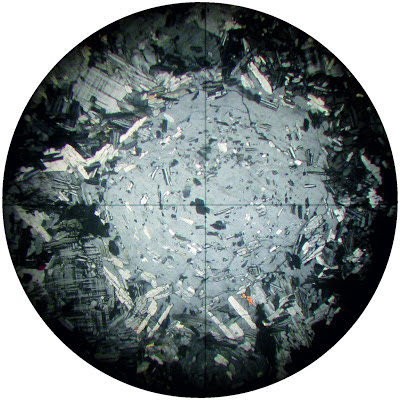 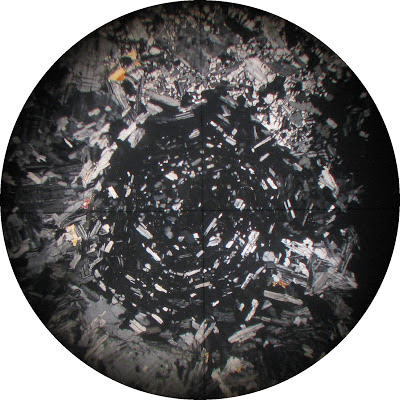