Imagine a crystal of quartz growing from a hot hydrothermal fluid. Since no mineral grows without imperfections, quartz will trap some of the surrounding hydrothermal fluid (see picture below). As quartz cools down, the trapped fluid inside cools down too and it shrinks. That volume change is expressed in appearance of vapor bubble. Trapped fluid now consists of two phases - vapor and liquid. Fluid inclusions like that have a bubble and liquid now and are commonly found in hydrothermal quartz. Samples of quartz in which such fluid inclusions can be found are used as thermometers. One can heated up a fluid inclusion with bubble and liquid to make liquid and vapor become one. Such transition is called homogenization. The temperature of this transition represents the temperature when the quartz was formed. This method is well established and applied by a wide range of geoscientists, mostly economic geologists and geochemists. 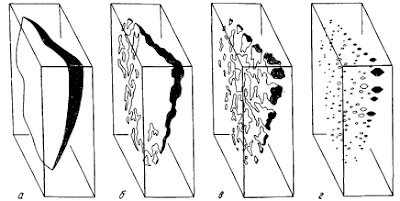 Healing of a imperfection (crack) in quartz. Surrounding fluid gets trapped. Adopted from Roedder, 1984. 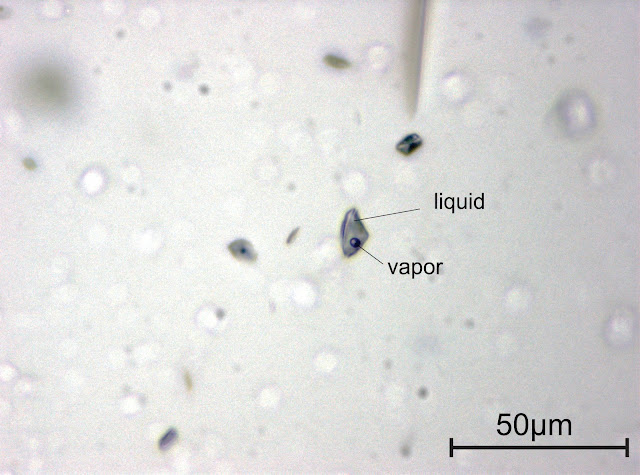 An example of a fluid inclusion with bubble 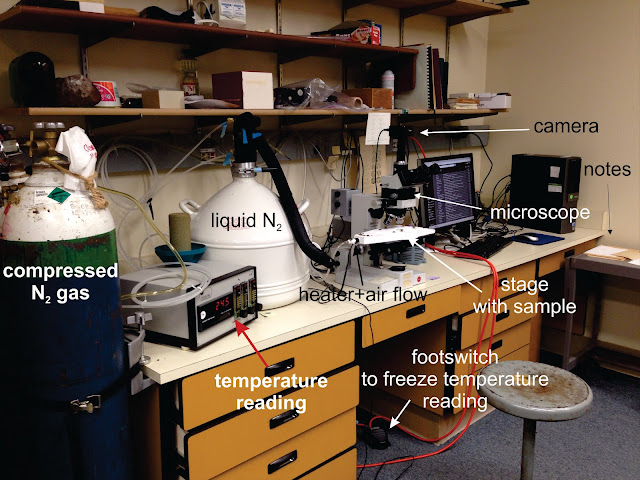 For homogenization measurements a heating element is used in combination with air flow. The element warms up the sample and thermocouple is used for measuring the temperature. A researcher regulates the temperature and observes a fluid inclusion with a bubble and liquid under the microscope. When the bubble and liquid become one (homogenize), researcher presses the footswitch and the temperature reading on the screen freezes. Careful measurements and keeping good track of inclusions (logging, taking pictures, drawings) produces the best results. Here how the stage for these measurements look like. 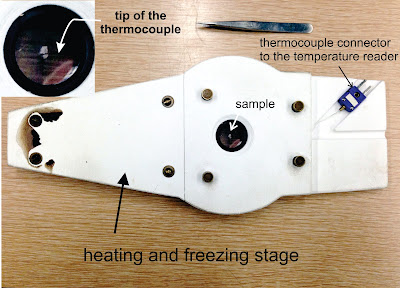 Amount 300 microns thick double-polished sample of quartz is held in the camera, between 6 layers of glass and pinned down by thermocouple tip. The heat blows from the left (where the paper label was burnt)

For conducting freezing experiments, compressed nitrogen gas is used to transfer liquid nitrogen through a set of tubing into the same stage. The sample experiences liquid nitrogen temperature of -195°C. After a fluid inclusion of interest becomes frozen (which is seen under microscope), a researcher needs to warm up the stage until ice crystals start to melt away and record when the last ice crystal disappears. That temperature is the freezing point.

Here's videos showing both heating and freezing experiments. Different inclusions are used. The stage of the microscope moves slightly so the field of view merges a little bit. I tried to maintain good focus through out the videos.The field of view in these videos is about
Heating a fluid inclusion that homogenizes via vapor+liquid->liquid at 241°C.

Freezing an inclusion that have freezing point of -8°C which corresponds to salinity of about 10 wt. % NaCl.
Posted by David Zakharov at 10:29 AM No comments: